Back to the Roots

While uploading the old videos to the new PeerTube channel, I viewed the first video once again, which shows a pretty good signal from just two pieces of aluminum foil taped to the skin. And I wondered, why do I even bother with such a complicated set-up like in Prototype 4? It was really annoying to assemble, and the device is clunky and fragile.

Let's go back to the roots and build something more simple. Plenty of reasons:

The Circuit 7 (whole device) shows a simplification of the signal processing module to a simple non-inverting amplifier per electrode with a gain of 221x. There's also a 560KΩ bias resistor towards Vref so the voltage we measure isn't too far off the center. In Circuit 6 (whole device) I had used 1MΩ, but here it produced mysterious oscillations, and going down to 560KΩ mysteriously fixed it.

This circuit also features a rechargeable 1.2V AAA battery with a TPS61220 step-up converter boosting the voltage to 5V, because I don't hate nature, and I burned through enough CR2032 coin cells. Coin cells also aren't exactly optimized for currents of 20mA, and thus get drained too quickly. 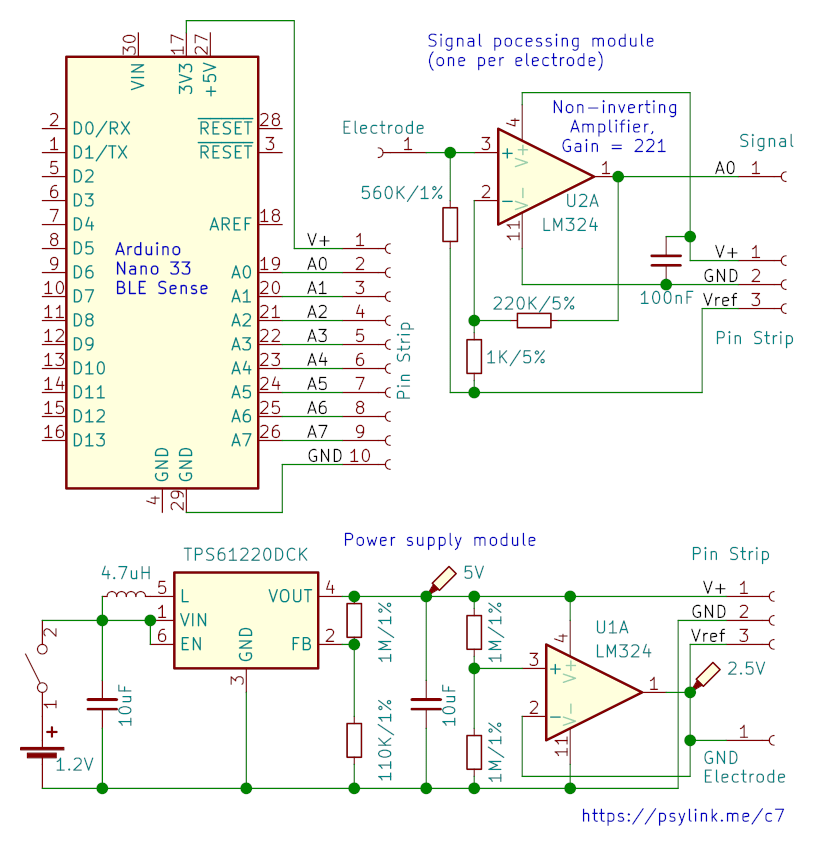 I measured a signal while pressing down a finger onto the table with two electrodes along the Flexor Digitorum Superficialis. Blue is electrode 1, red is electrode 2, and green is an amplified difference:

But let's cut even more out of this circuit. Here's one that is designed to be a shield to the Arduino Nano 33 BLE Sense, containing just the power supply, and an array of pass-through pins: 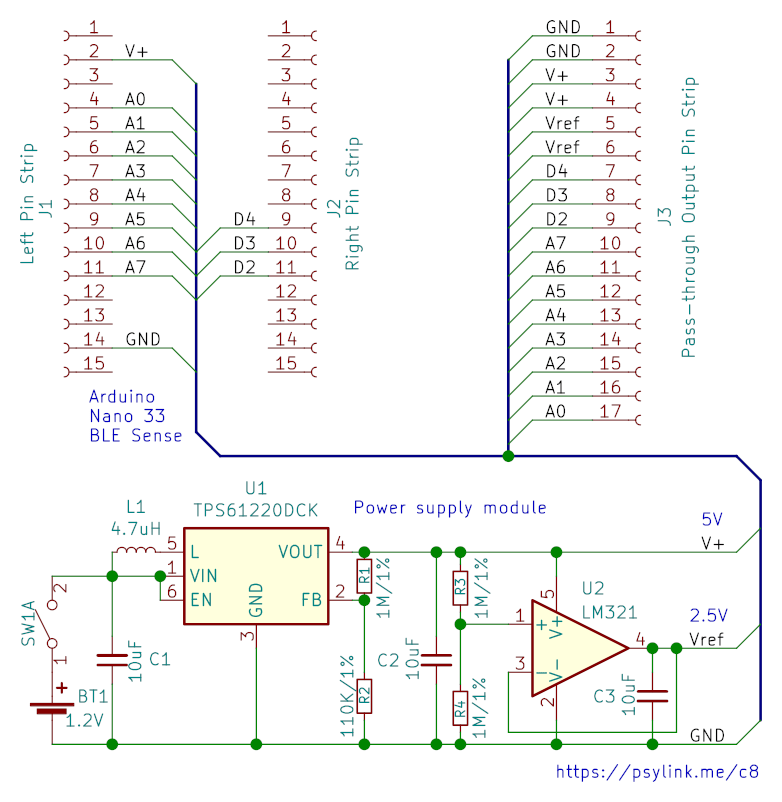 The signal that I'm getting is weaker, but certainly usable: (again, I measured a signal while pressing down a finger onto the table with two electrodes along the Flexor Digitorum Superficialis. Blue is electrode 1, red is electrode 2, and green is an amplified difference)

I also built a PCB that implements this power supply/pass-through shield, and I figured, even if the device ends up not very useful, I'll still be able to use this for experiments later on, thanks to the pass-through pins. 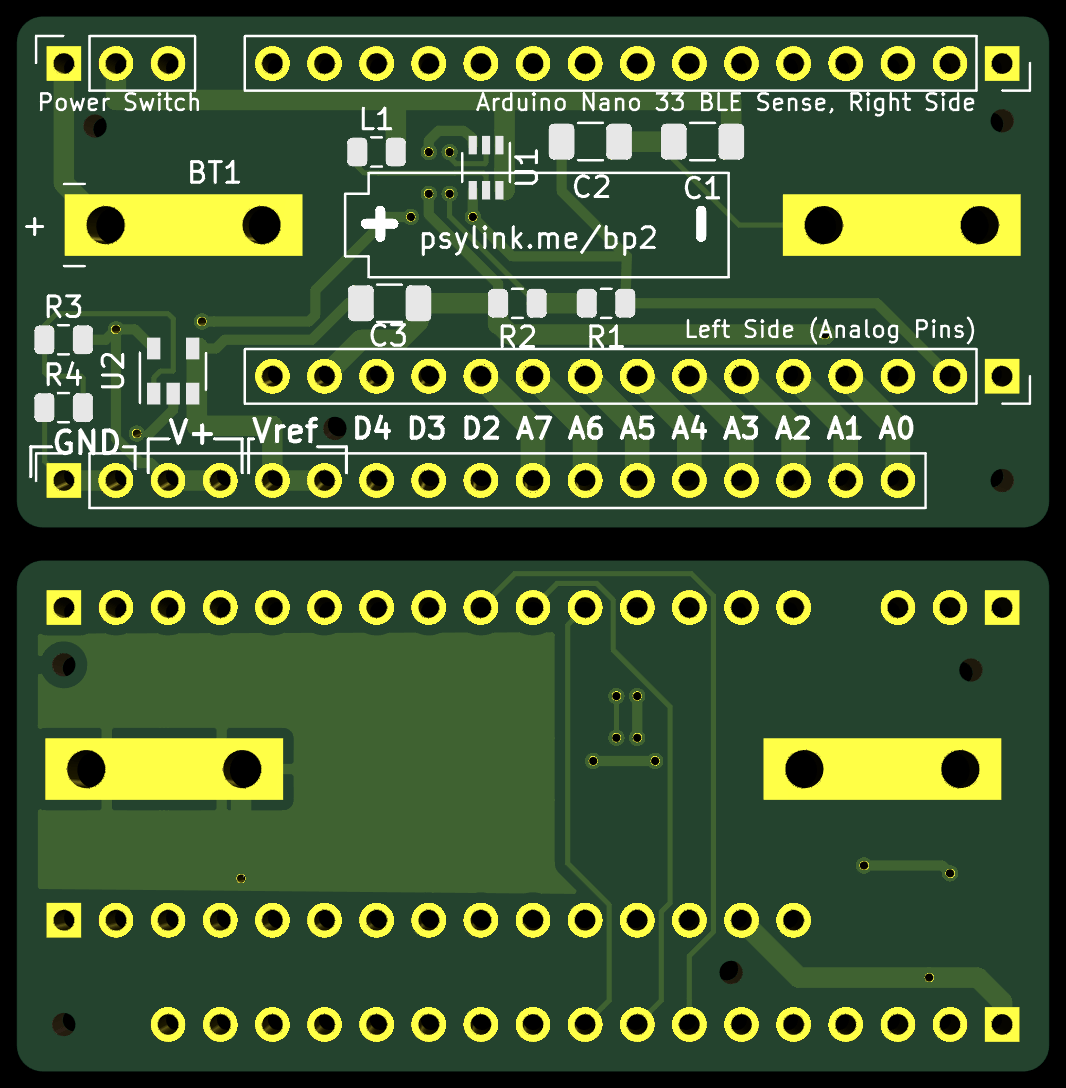 I just hope that the PCB/circuit will work at all. I still haven't figured out how to simulate it, and I don't really know the best practices for PCB design. The PCB footprint for the AAA battery clips (Keystone 82) is my first custom-made PCB footprint too. Hope it all works out.

It will be a relatively small forearm band with 8 electrodes (+ 1 ground electrode), which I plan to place around the Flexor Digitorum Superficialis for detecting what individual fingers are doing. The information from the gyroscope + accelerometer should cover the rest.