I haven't been posting recently because I've been focusing on other areas of my life, but there has still been progress with PsyLink:

I redesigned Power Module 3 to be more easily hand-solderable by enlarging the solder pads and adding thermal clearances to some of the filled copper areas. (The copper tracks to several pads were so wide that the heat of the solder iron was dissipating too fast into the copper, and the pads were not heating up properly). The result is Power Module 3.1.

PerlinWarp reached out to me, and after some fruitful conversations, I build a Prototype 7 for him for research purposes. It's a hybrid of Prototype 4 and Prototype 6 which combines the advanced Power Module 3 with a cluster of Electrode Module 1 attached to Sleeve 3. 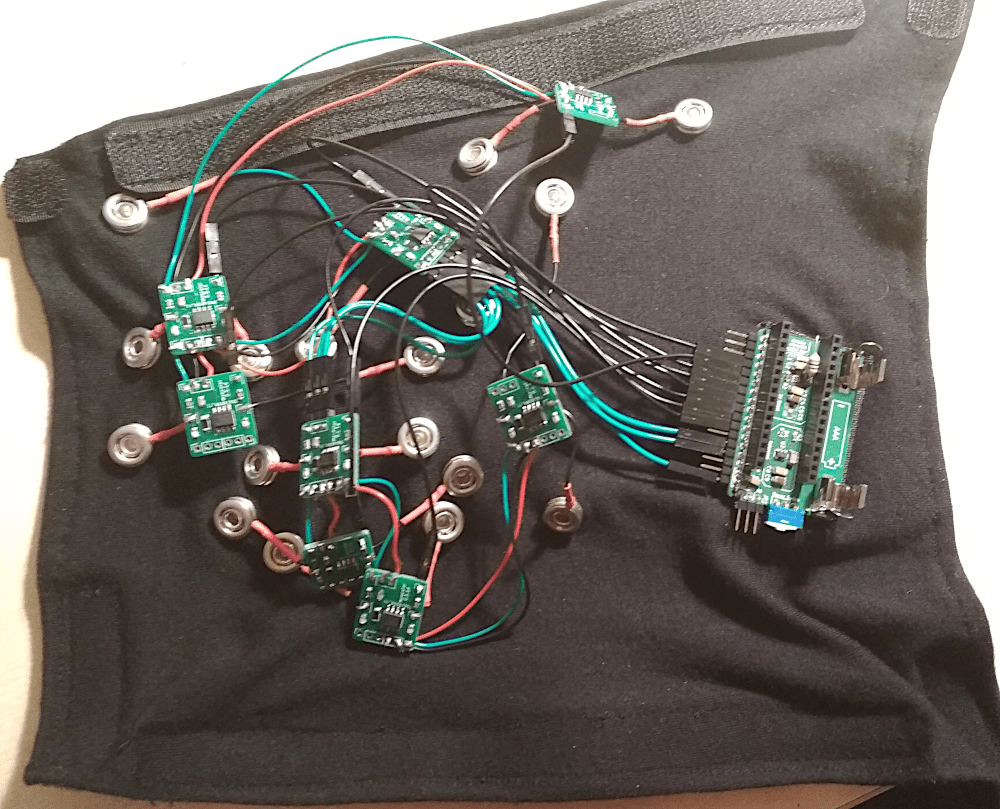 The assembly of the Prototype 7 took a full 20 hours of mindless labor, so I had a LOT of time to think about improvements to the design that would make it easier to assemble:

The 8th prototype implements those changes, resulting in a device purely made of PCBs connected by rubber bands and wires. These PCBs rest on the skin on legs of metal, which double as the electrodes.

As of now, only the differential amplifiers are finished. The circuit for these is Circuit 10 (electrodes): 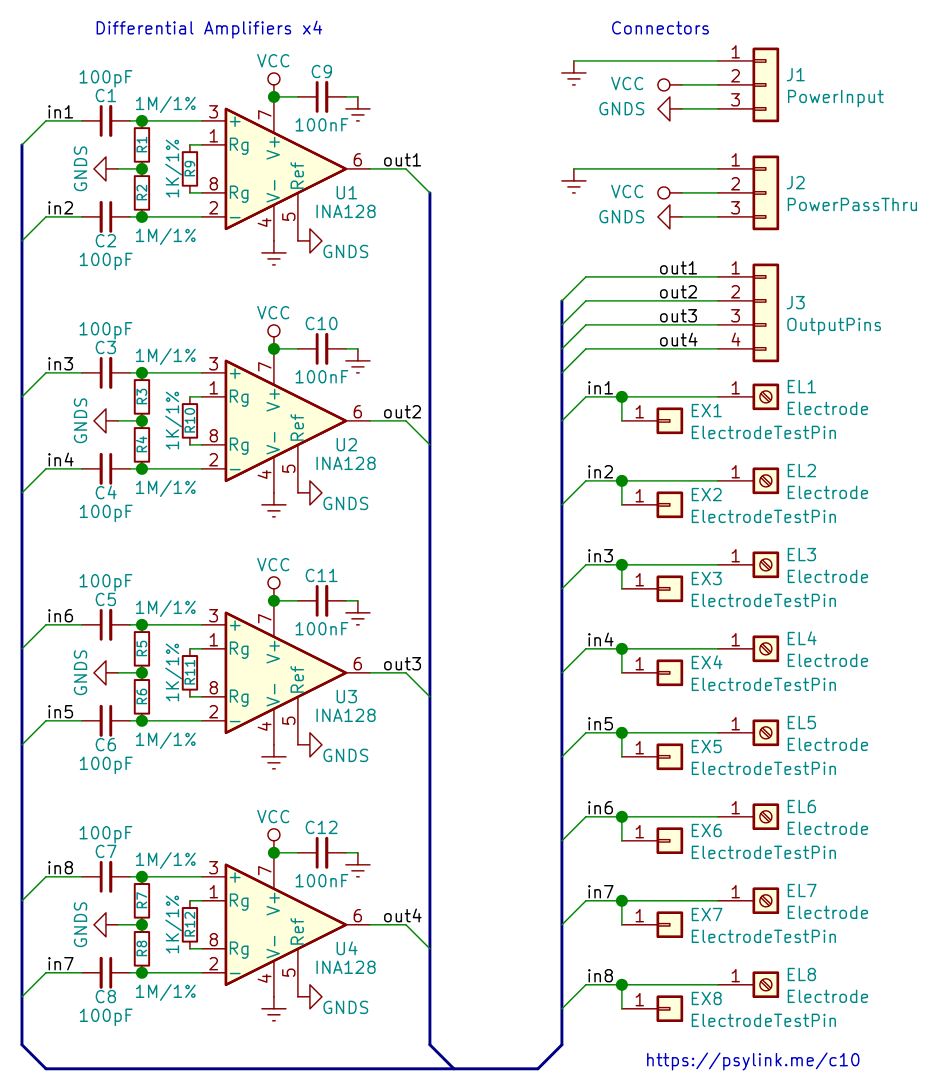 The front-side of the Electrode Module 3:

The four wide holes in the board are connection points for rubber bands, and the eight round metal-plated holes are mounting points the electrodes. These consist of a screw on one side, a nut on the other, holding both metal pieces tightly in place.

Dome nuts are also called "hutmutter" in German, which translates to "hut's mother" (my nickname is hut), so just because of that fact, I had to try them out.

Additionally, one can use the pins EX1 through EX8 to connect arbitrary external electrodes.

A first prototype using Electrode Module 3 and Power Module 3.1 (with an improvised rubber band mounting mechanism) can be seen here: 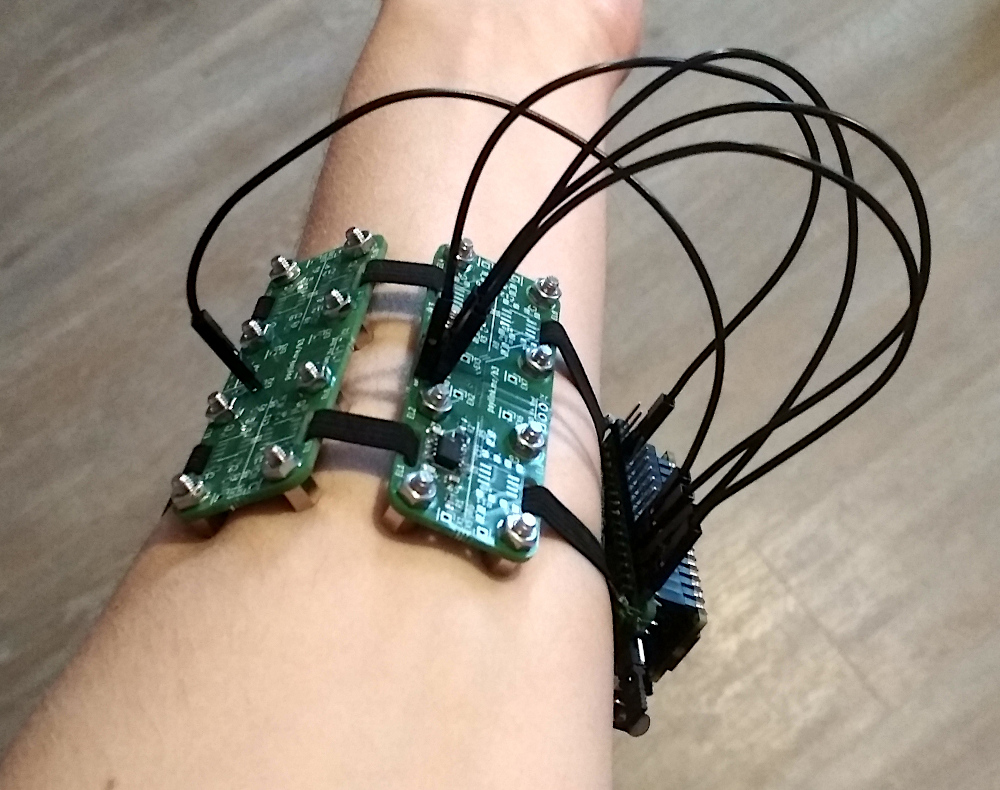 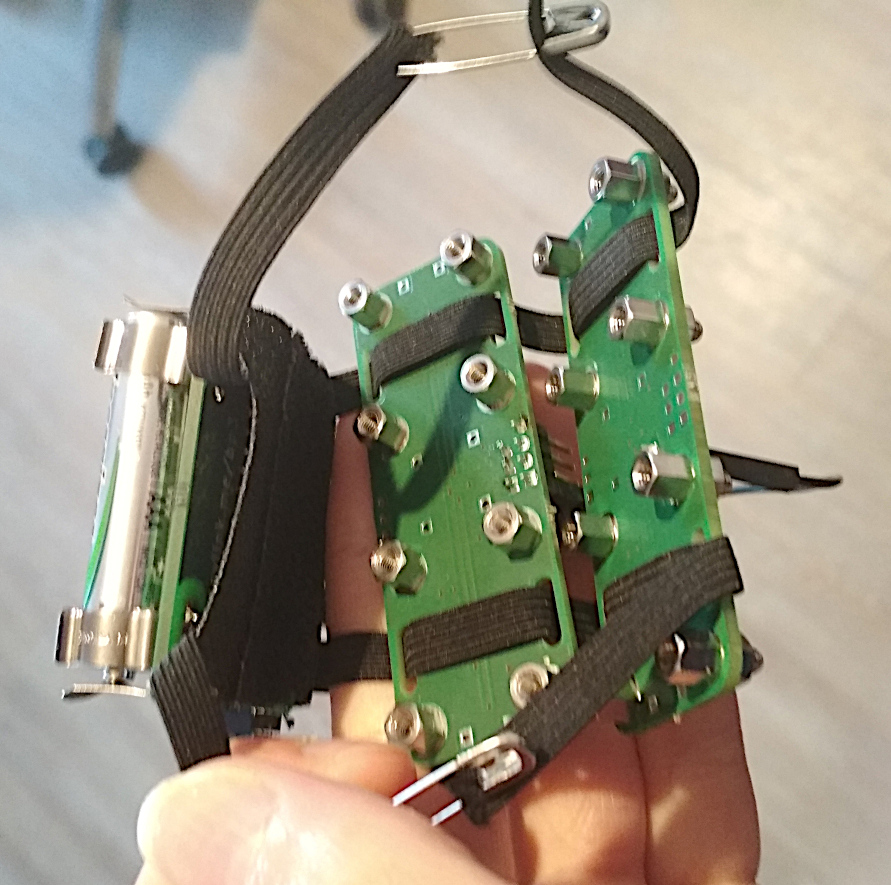 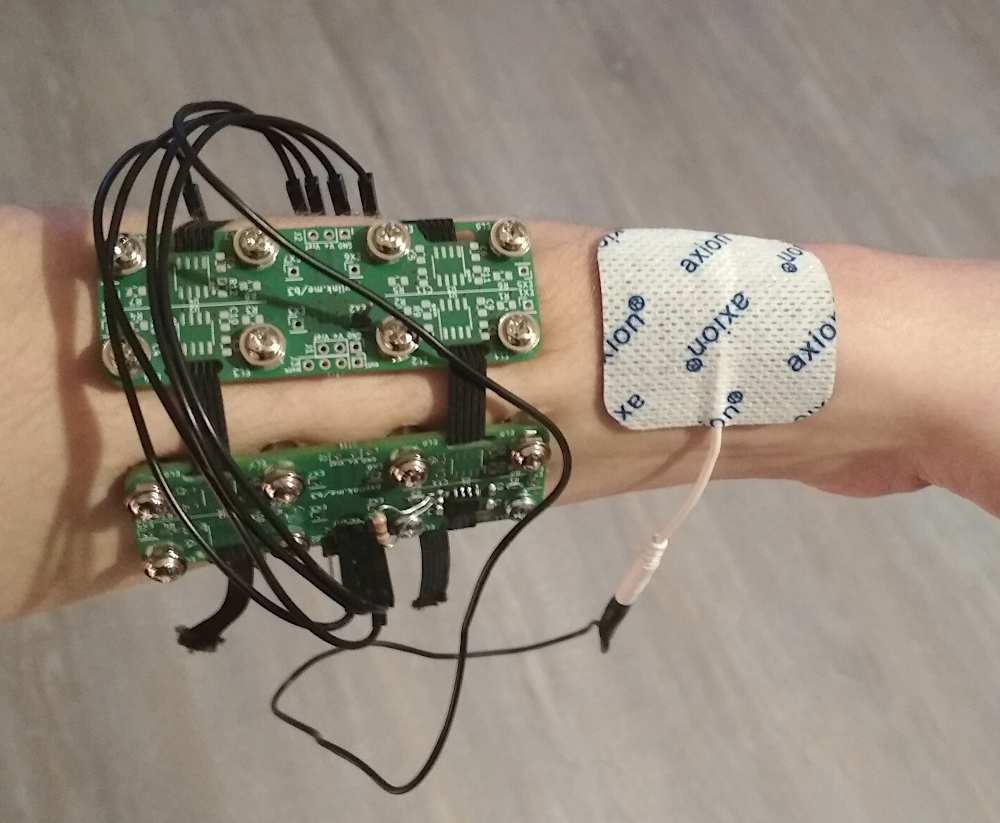 I did not find an improvement in the signal though, perhaps wet electrodes are not worth it.

Finally, the global microchip shortage has affected this project as well, and I could not find any sources for the power converter chips (TPS61220 DCKR) that boost the battery voltage of 1.2V to the required 5.0V. I still have some legit chips left, but in the long term, I need more of these, so I acquired some chips from Shenzhen via AliExpress. They have been advertised as "Original new, 100% quality", so what could POSSIBLY go wrong? But I tried them out, and they actually do their job quite nicely.

The power module is currently only clumsily attached to the rubber band. The finished Prototype 8 will need a power module that's more compatible with the Electrode Module 3, by making it as long as the Electrode Module 3, and either by adding rubber band mounting holes, or by adding pin headers so that it can be stacked on top of the amplifier board, which would reduce the number of dangling wires as well.

I will also try out cheaper differential amplifiers to reduce the total cost of the device from ~70€ to ~30€ (excluding the ~39€ for the Arduino Nano 33 BLE Sense).